Tara, You loved this blog so much. You were my #1 fan and always made me believe I could do anything. I have a very special tribute planned for you on the blog. For now, rest peace my sister. I love you more than words. Eat on... 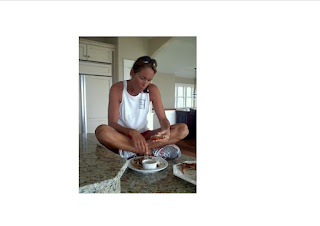 Yeah I said it. And don't give me any shit for taking so long between blogs. As a newly single fatty I have quite a hectic schedule. Never taking off make up and pretending to only eat salad is exhausting. Who does this shit? I can't wait to move into Single SIF 2.0. I slide a little more onto the plate...stop hiding jerky snacks in the purse and reveal all that is me in soft white light. I find it to be most flattering. Yes, I carry spare bulbs in my purse and switch them out prior for the reveal. I didn't fall off the fat wagon yesterday. Duh. Get some game sisters. Be prepared. See your ass in cheap Dolla Store white light. Have your fat ass runnin to Wally World for some quality lighting. In any event. One of our fellow fatties tried to pull a fast one...on me...the original (well 2nd original behind Mother) SIF. I gots mad skills sisters. "Fatbotage" stands out like a Krispy Kreme at a Weight Watchers meeting. Or Fatty Hypnosis as it were....

You'll recall my trip to the magic man a few years back. He claimed he could hypnotize the fat right outa me. Me and 4 other people who were dumb enough to spend Valentine’s Day with him. What was the alternative? Spend it with my husband? I'll take the traveling freak show for $75 Alex. Clearly the most expensive fuckin nap I've even taken. Thinking back I really should have had better results. I was honest. I admitted to a pre-hypnotic binge. No one else did. I certainly don't believe for one nano second that anyone who pays to stop eating on the day they should be getting flowers and dick didn't run through a drive through for one last tryst. I know I did. Ate so many damn beans at Taco Bell I was certain my farts would be powerful enough to break the spell. Luckily that didn't come to pass. I remember 3 things about that night...hard metal chairs (which made me worry even more about the bean situation), fearing I was going to randomly admit to things no one ever needed to know...and HER.

I liked her. She was really nice. I suppose one shouldn't make friends at therapy. Like I need more fucked up friends. I have a plethora of them and they didn't cost me $75. But...fatties like chattin it up in these situations. I think I was secretly hoping she had some fucked up story that would trump mine and make me look like some sort of anorexic fat angel. I'm not sure what that looks like, fyi. I can't control my thoughts. You'll recall I was under the influence of the magic man. Who I believe to be a smoker. And he zapped people for that too. Interesting. He had wooden teeth. That's how I know. Ok so I remembered 4 things. I fear I am still under the influence. Anyway. She was really nice. And not outwardly fat. Like me. Fat trickery. You know I appreciate this quality in others. That's how I knew she had a closet full of bones. Chicken bones. Greasy ass half eaten chicken bones. It was an instant connection. On our break we chatted it up in the hallway. I was hoping to run out to my car for a Snickers. Nope. She must have given me the strength to just say no. Whatever. My car was parked 8 blocks away. The Snickers could wait until after I agreed to never eat again. Frugal fatties don't expend excess energy.

Revelation. We realized we were both emotional eaters. Happy, sad, angry...any emotion worked. The only time we didn't eat...when we were sleeping. My soul mate. No. I didn't get her number. She was the hot guy you meet at a bar and hope you never see again. Bcs you were dumb enough to marry someone not as hot or smart thus keeping you from eternal happiness. * This bitter moment has been brought to you by www.sistersinfat.com * Except she wasn't hot. Or fat. And I certainly didn't want to hook up with her. Grab a burger maybe. It's an inner connection thing. Anyway. No numbers. Just a one night stand of harmonious fat chat. That's it. Why would we need to call each other? I couldn't be her sober friend. God knows the magic mans evil spell was already wearing off. We would never see each other again. Never. Why would we? We'd gone all this time and never met. Why would we suddenly feel the need to be fatty BFF's? That's Big Friends Forever for you slower fatties. It just wasn't plausible.

That is why I saw her exactly everywhere I went for the next 6 months. In the grocery store. In the shopping mall. At the chiropractor. You name it. There she was. I had no aversion to seeing her. Other than the fact she knew all my fatty secrets. Things I wouldn't want the average person to know about me. New Me Monday. Fat Girl Lunch Hour. Binging. It was very Jerry Springerish...gone fatty. She was my Fat Baby Daddy. I gotta hand it to her though. She was always very complimentary. Lots of "You look great." As an addict you want to believe it's true. Now that I am semi-sober...I see right through that shit. The instantaneous sizing me up to see if I might weigh less than her. Peepin my grocery cart to see if I'm taking Lil Debbie home for the night. If I want to eat that Ho I damn sure will! And I don't care if your fat fucked up ass sees it or not! Debbie and I are togetha forever. Calm down. That's me talking to myself. It's what I do. I just don't think you should have to see your AA/OA buddies more than you see the bottom of an ice cream carton. It's not right. Had I been hip to her game back then...I would have been one skinny bitch for less than $75. Right under my front tire. Aint much room there for growth. Yeah I said it.

Let's bring this full circle shall we? Fatties like fullness. So I'm dating. That's hard enough to pull off on a good day. Calming the inner fatty so I don't bite my fingers or moan when I eat. It's hard work. I got a lot on my mind sisters. So the new beau wanted to take me for a nice dinner. Nice usually equals smaller portions so I hit up a drive through bout 4:30. Anyway. It was raining that night. Not ideal. Rainy nights are my emotional eating fried chicken nights. Yes, I have special nights reserved for the scalding of skin. I don't often veer off course. But he's hot and he doesn't want me to reproduce anything that walks or talks. Sometimes you just gotta compromise. He dropped me at the door and asked me to tell the hostess we had a 7:45 reservation. I can handle this. Or can I?

The hostess. Can you guess who the hostess was? I promise you it wasn't the Hostess I wanted it to be...the ones I call Twinkies with the creamy middle. No this hostess was more akin to a Ding Dong. It was her. And ya know she made it a point to hug me and tell me how great I looked. Except this time I did. 36 pounds lighter thank you. No thanks to the magic man. Or her ass for that matter. We did that whole fake conversation thing girls do when they secretly hate each other for no reason other than they had hoped you would look worse. I didn't think it could get any worse. And then it did. "So I know I should remember your name. What time is your reservation?" A. I never wanted or expected you to remember my name. B. I secretly fear I may have given you one of my fatty aliases. C. It's time to let this bitch know who's in charge. "Yeah...no that's ok....bcs my name has changed. I'm divorced and here with my boyfriend. My husband left when I lost all the weight. He just couldn't handle how hot I am." Or something along those lines. All I know is it was enough for my date (who I had now elevated to boyfriend status sans permission) to ask who she was. I suggested we sit down for this one.

How do you tell a new man on the scene that you once ate so much you had to pay a pedaling magic man to convince you to put the fork down and step away from the plate? You don't. You just tell him she's a friend from Curves and hope she doesn't out you. That's the cool thing about befriending people with as many chicken bones as you have...if they out you they out themselves. Check mate. I thought the nightmare was behind me. She was. Behind me and instructing our waiter to send me a piece of the fattiest cake on the menu and 2 Irish Cream coffees. Speechless. Fatbotage. Not only did she know I had already had one dessert...she wished for me to wash down another with a 2 fat coffees. I tried to explain the root of my anger to the new guy. He didn't get it. Of course not. Why would it be weird for my Curves buddy to send me cake? Um bcs we don't in fact have a Curves within 50 miles of us and everyone knows girls don't send girls cake! We send shots to dull the pain of not eating so you'll think I'm hot and fuck me. Deep breath.

I thanked her on the way out and told her I had to get a to-go box as I was just too full to partake in her conspiracy. Said with an evil smile. If I could have poured the coffee on her without the fear of no sex...I surely would have. Make no mistake. She knew what she was doing. 100%. Send a fruit tart...we're still friends. Send a piece of cake with custard oozing out of every layer. It's on. I'm working on my plan for retaliation. I'm weighing out the side effects of running her over with my car. Trying to come to terms with prison time. I don't look good in stripes. And you think I make this shit up?! Another page from the book of..."I can't make this shit up!" I AM the Larry David of the fat world. God puts me in these situations in hopes of me sharing them with you. It may take me some time between blogs...just know I am always hard at work! I am the fat defender!
Posted by Keller B at 5:36 PM No comments:

"Cheers to your Inner Fatty!"

SIF around the globe!

Blogs Worth Checking Out!